Is Temperament Testing Really Worth the Effort?

This is another post that’s probably going to upset a few people. It’s about the predictiveness of puppy temperament testing.

Temperament testing has been an important fixture in determining suitability of dogs for service work, therapy work, police and military service, and even for companion dogs.

I started temperament testing in the 1990s in the belief that it was the only responsible way to place a puppy. All of the other good breeders did it, my mentors did it (including those involved with major service dog organizations and the US Department of Defense puppy raising program), so I did it.

But like many things involved in breeding, it’s not necessarily a sound practice simply because everyone is doing it. We also need to look at the science.

Back then, we didn’t have much, if any, science, we just had the best efforts of the best in the business. Now we have some studies to look at, so let’s take a look at what they say.

Service Dog organizations have a great deal invested in the performance of adult dogs, have regimented puppy rearing programs, and are able to collect data and do follow up, so much of the results and studies we have are from service dog organizations.

There are more than a few studies available. Here are some highlights, and you can pour through the references if you really want to get lost in the weeds.

A couple of studies had results that conflicted with those I list above.

This is normal in science, and the responsible way to handle these conflicts is to look at the studies individually for quality and also to look at the evidence as a whole.

In other words, you need to ask yourself if there more evidence supporting a particular conclusion. The truth is found in a preponderance of information, not in a specific single study.

Something else to consider is that a closer look at these few outlying studies show they tend to have smaller sample sizes and the studies with larger sample sizes (which are more reliable as a whole).

If testing of temperament in puppyhood is not predictive, when is temperament evaluation reliable?

A 2012 study of guide dog candidates using C-BARQ [14] criteria (a standardize behavioral assessment) of a whopping 8,000 dogs determined that while the test was not predictive of success, it did allow them to rule out dogs likely to fail when those dogs were tested at 6 and 12 months.

So if temperament testing isn’t predictive, what is?

In a recent study,[13] there were things we as breeders can do and can educate/encourage in our puppy homes to stack the decks in favor of better outcomes for our puppies. (This study used C-BARQ evaluation)

I’ve been reading the research on this for a couple of years. I’ve talked about it a little in some online discussions, but I’ve been hesitant to make any boldly public statements. But here it is now.

Two years ago I took the plunge and followed the science.

And the sky hasn’t fallen.

Granted, this is anecdotal. My program is a small sample size, I don't have a robust (or even close) data collection method, and I make no claim of my experience being a scientific representation.

Now if you temperament test and are happy with it, that’s great. I know from experience that some customers like it, it makes them feel better.

But if we are honest with ourselves about what the science is saying, for the most part temperament testing doesn’t really mean a whole lot, if anything.

And I decided that instead of taking all of the time and energy to evaluate puppies, write it all up, and communicate all of that to families, I would rather take that time and energy and put it back into working with the puppies.

It’s paying off for me and I hope you find what works best for you.

Feeding your dog in the age of the DCM scare

Why Is a Breed?

Is Temperament Testing Really Worth the Effort?

How to Buy a Puppy Responsibly

Feeding your dog in the age of the DCM scare 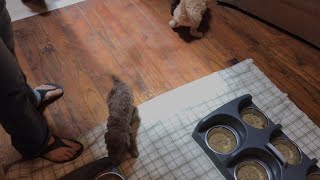 Pilot to copilot: ready to take off